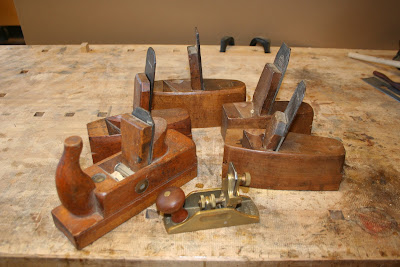 The array of toothing planes in the collection.


The toothing plane is one of those planes that reminds me of the fashion industry. First it appeared around the 18th century, fell out of fashion in the mid 20th century, and now its back.  I am shocked that this plane once lost its popularity.  In my world this plane serves as the "when all else fails" plane.  The plane itself  works with and across the grain, and there isn't the need to be concerned of grain direction.  The teeth won't dig into the grain and tear out isn't of concern. In my opinion nothing can challenge a sharp toothing plane

A toothing plane is nothing more than a wooden plane with an iron with saw like teeth on the sharp end. The pitch angle can vary anywhere from 60 to 110 degrees. The coarseness of the teeth configuration also vary, and commonly the higher the pitch the finer the teeth. The purpose of such a plane was once used to prep all wooden surfaces that were going to be veneered. The striations left by the plane told the period craftsman that the surface is flat. If there wasn't any striations that meant there was a low spot on the wood and further flattening was necessary.  Also in the period it was standard practice to use a coarse iron for the substrate and the finer iron for the veneer.

If you are interest in purchasing a toothing plane, than you are in luck. Commonly these planes show themselves at flea markets,  ebay, tool auctions, or at Joshua Clark's tool sale on hyperkitten.com .  If you can't seem to find one made out of wood or if you prefer a metal version than you can visit Lie-Nielsen ToolWorks.   The Lie-Nielsen #212 plane was my first toothing plane and its a joy to use.  Commonly I get asked what do I prefer, Wood or Metal? Honestly I love the wooden version due to the selection of of teeth per inch. Yet if I had to pick one, I would go with the Lie-Nielsen. 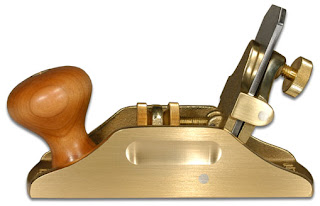 As a maker and restorer of furniture I thoroughly enjoy working with all hand tools. The toothing plane is one of my favorite to use and to collect. I collect them simply because I work so often with veneer.  Yet that isn't an excuse to have as many as I do.  Maybe I can still use the excuse that I need them for the "students" in the classes I teach. 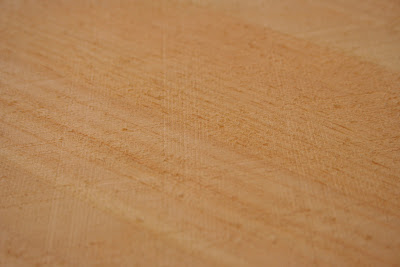 The result of a using a toothing plane on pine.

A common question I often get asked is how to sharpen the serrated edge? Some will say file the bevel first and than sharpen in the usual way.  I would say the first step is to grind the bevel on a slow speed grinder.  Since the iron isn't harden to high degree you must pay attention not to over heat the iron.  Also the craftsperson needs to remember the golden rule when grinding, the length of the bevel should not exceed more than two times the thickness of the blade at the point of grinding. Otherwise, the blade will dull quickly and the edge could crumple like tin foil. 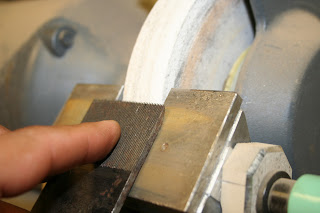 Grinding the bevel, being careful not over heat the iron. 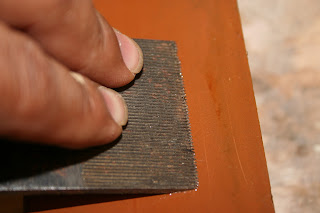 Honing the bevel on a water stone.

After going through the series of grits I remove the burr by hitting the iron into the end grain of a piece of Hard Maple. Never hone the back of the iron to remove the burr, for the teeth are only so deep and any honing can remove the the saw like grooves. 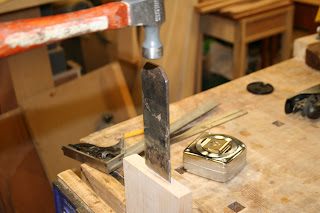 Striking the non-bevel end of the plane iron into the end grain Maple.

After striking the plane iron, the only remaining step is to set the plane for a light cut and tooth away.